CTX 3030 and XP Deus comparison from a Ghost Town laden with iron and a Gold Coin found by the author.

I was fortunate enough this spring to obtain permission to hunt a private property Ghost Town. The area is very close to my home so for me it was very exciting not having to travel but a few minutes to my new site. I wasn’t however, ready for what was to become one of the most difficult sites that I have ever detected. I arrived all excited to find some old coins even though I knew the site has been detected by many others. The site is around 150 years old and has been a Ghost town for 100 years more or less. It wasn’t a large town but the buildings covered a very large area since it was more of a farming community.

Now to get to the site and the problems I faced. I grabbed my CTX 3030 with the standard coil as I usually do, turned it on did my adjustments. The area is now plowed fields with no building sites or pictures that I could find at all. The only way I could figure out where things and people were was to look for iron and or glass. So I removed my discrimination pattern from the CTX and ran an open screen, so I could hear the iron in hopes of finding good areas like buildings. That was really funny. There was so much iron the CTX sounded like a machine gun. I didn’t want to change to the 6-inch coil because of the plowed furrows and the enormous size of the area. I figured I was in a bad spot and would try to listen to the machine on the fast setting, go-slow and try to work between the constant sound of iron targets. I did that for a bit and finally changed to one of my custom programs with some Disc. I was finding a few non-ferrous amongst the iron so off I went. What I was finding out was the CTX was falsing a lot on the furrows as I went over them, so I had to work them as much as possible. I thought about changing to small coil but because I was trying to get the best depth I could I held out.

A couple of hours later being somewhat disappointed I decided to try a new plan. I had recently received an Elliptical HF coil from Gerry and thought this would be an ideal spot to see how it would handle this junk yard. I went and got the Deus setup with my own program I run for coin hunting and went to swinging. Now the Deus runs a faster recovery speed than the CTX so it should be better at this task. Now, with the faster recovery speed you will lose some depth but it will also see targets the CTX won’t. I started out with the HF coil on 28 setting thinking it would be more sensitive on smaller targets. I was right it was. It loves finding small bits of iron and telling me it was a good target. Time to change things. I went to the 14 setting and made some other tweaks and got the XP running very quiet in this bad iron. So you know you can look forever to try to find a clean spot to ground balance your coil and you will not find one with an 11-inch coil, I tried. After hunting a while longer I did some more adjusting on the silencer and reactivity to make the machine work as I wanted. I need you to understand I hunted this site for about 3 months and worked with both machines trying to refine them to suit this site.

Now to sum up what I learned about the two machines. The CTX as I knew would found some deep targets that the Deus missed. To that I had to go so slow and do the Minelab wiggle on every half-way good sounding target. To say the least it was difficult but also paid off in some very nice tokens. What I didn’t like was the amount of square head nails that it found and because of the site I had to dig. It did do a pretty good job on the rest of the iron including the most big iron. The round harness items were dug all the time sounding like bigger silver, that is to be expected. All in all the CTX did a good job at what it is designed to do as long as I used very little discrimination so it would not blank out over large areas.
The XP Deus as it turned out was my detector of choice for covering the area and then I would follow up with the CTX. I found the only way to be successful was to grid a smaller area then go back and use a circle search pattern to come at the targets from all directions trying find a non-ferrous item. I was and am very happy with the Deus in this iron. I know I have not found all the targets, it is impossible. I did however find my second GOLD one dollar coin with the Deus using the new coil. I was able to get machine run smooth and could get around 6 inch depth on a dime but again without my knowledge from the CTX on how to wiggle out some targets it too would not have found some really good items. The shape of the XP Elliptical coil was a huge deal. The round coils could not see or sort out some targets. I did take the time to do a lot of testing.

Pictures of most of my finds with the machines are on my Facebook page: https://www.facebook.com/RyePatchRon. I need both of my machines to work this area. Is one better than the other yes, at certain task but without having both and knowing how to adjust them most people would have gone home after a short time of digging iron or no non-ferrous targets. You have to put in the time to learn your machine and what it will or won’t do. If you think mine is the best and don’t miss anything you would be wrong on a lot of sites. Yes some sites you might get most of the targets but no one or one machine will get them all. I know for a fact these guys would still be in the dirt if not the XP Deus and the New Elliptical coil. 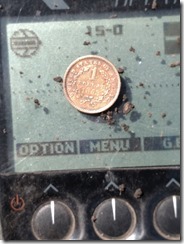 Thanks to Gerry at http://gerrysdetectors.com/ for getting one in hands as soon as they were available. The gold coin and the tokens has paid for the Deus on this one site alone. 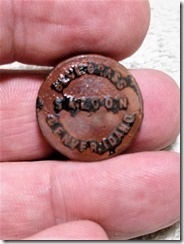 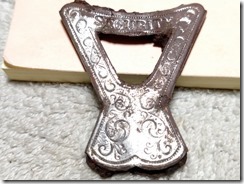 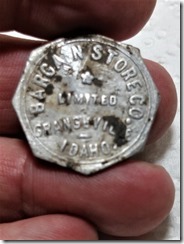