“I think I must have dropped it right in this area,” my friend Harry said as he pointed to a patch of ground that had been raked and detected for gold nuggets many times over the years. He was explaining to me that he had just searched the area extremely thoroughly with his Minelab GPX 5000 detector set in the fine gold timing with a small search coil, and had found a tiny nugget the size and shape of a very small bird shot. After showing it to a fellow prospector, Harry put the tiny bit of gold, along with his test nugget, back into his nugget bottle…or so he thought; upon showing his wife later that day, it was discovered that the tiny nugget was missing! The area was then scoured again with the GPX 5000, a Fisher Gold Bug Pro and a White’s GMT in search of the lost nugget, without success. 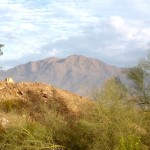 “Let me try to find it with my Minelab SDC 2300 detector, Harry,” I offered.
“Sure Lunk, that’s a great idea, go ahead!” He replied. So I quickly unfolded the unit, set it to maximum sensitivity and began slowly searching the area. Within just a couple of minutes, the 2300 responded with a crisp, clear signal. “I think I may have found it,” I said as Harry, his wife Maureen and a fellow prospector all huddled together in anticipation. After clearing the surface stones away from the underlying soil, I soon discovered that the target was actually buried. The target was out of the hole and in my scoop after removing only a couple inches of material. A quick sifting revealed a small, thin and ragged piece of gold. “Is this your nugget, Harry? I asked as I handed it to him.
“No, mine was shaped like a bird shot,” he replied as he handed me back the nugget, “but that’s impressive!” 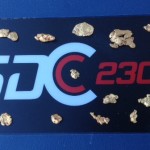 “Okay, well it’s gotta be in here somewhere,” I said as I continued the search. Soon I unearthed another small nugget, and another, neither of which were Harry’s missing nugget! Needless to say, everyone was incredulous that the SDC had so quickly found these targets that their detectors had missed. “It’s the new MPF technology of the SDC 2300 that is able to find nuggets that are just a little too deep for the very low frequency, VLF machines, and that don’t respond well or at all on other pulse-induction, PI detectors,” I explained.
Dusk was setting in over the Arizona desert by this time, so I resumed the search the following morning. After recovering seven more small nuggets with the 2300, none of which were Harry’s, I could only assume that his nugget had somehow escaped when he went to show it to his wife back at their RV. 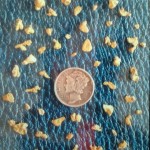 This is just one example of why I couldn’t put the Minelab SDC 2300 down from the time I picked one up in the middle of November until I started swinging the new Minelab GPZ 7000 in March. During that time the 2300 located over 155 nuggets, just on beat-up old patches. 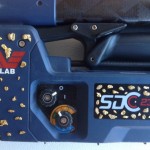 I haven’t had as much fun with any detector since I first started detecting for gold nuggets back in 1996, and I sure wish I would have had this magnificent machine back then. Happy prospecting!